The Lizareses are a laid-back clan but the family's modesty (at least by Negrense standards) is by no means an indication of how the family's wealth compares to others. The Lizareses just seem to have been bred to like their meat and most everything else, sliced in thin, bite-sized slices while the Lacsons, our well known hometown political rivals, are more profligate in their ways and for their meat, are said to have a preference for thick slabs of steak. My guess is that the family's style is because our grand matriarch, Enrica Alunan Lizares, was widowed about two years after she gave birth to her 17th child. Whatever her wealth might have been at the time of her loss, only an indefatigable, no-nonsense,God-fearing woman could have singlehandedly raised such a big brood while managing family properties and making investments grow.

A history of the sugar industry mentions the Lizareses as being among the first to establish mechanized sugar mills in the island. So successful was Lola Dicang as a planter and investor that in time, her family had controlling interests in three sugar centrals, Talisay-Silay, Bacolod Murcia, and Danao. Although these three mills are now defunct, heirs ofEnrica Alunan Lizares were also among the incorporators and officers of the First Farmers Milling and Marketing Cooperative which was built on property purchased from Enrica's son Antonio.

The writer does not have figures as to the number of Talisaynons who are somehow dependent on Lizareses for a living. It is however known that the first Barangay High Schools in the Philippines were built  through the efforts of Mayor Mario "Batoy" Lizares (grandson ofEnrica).Lizareses either own more farms or are more generous than other landowners in Talisay (or both) but of the 24 Barangay High-Schools in the family's hometown, 21 schools are built on property donated by Lizares heirs. It was also during the term of Batoy's brother Amelo "Meling" Lizares that Talisay became a chartered city. Not surprisingly, the family's generosity and record of public service in Talisay have helped Lizareses win election after election against Lacson rivals.

Lizareses are a presence in their hometown, and not just because of the 21 schools, the Lizares haciendas, the Lizares streets, and what remains of the Talisay-Silay Sugar Mill. "Balay ni Tana Dicang," Lola Dicang's 2 story house built in the traditional Filipino "Bahay na Bato" style, was constructed sometime in the 1880s and it is for good reason, reputed to be the best preserved ancestral home in the province. Unlike other heritage houses which havebeen through abandonment and decay, the Balay was lived-in until the1990s and it remains the favorite venue for important family occasions, the town fiesta, and Good Friday gatherings. Now a lifestyle museum that's open to the public, the house was bequeathed by Enrica to her 6 daughters together with a provision in the will that part of the income from two specific farms should be used to maintain the Balay.

Several Lizareses have been mayor of Talisay and Enrica is known as Tana Dicang (short for Capitana Dicang), because her husband Efigenio was at onetime, the Cabeza Mayor, the town Mayor. Several of Enrica's sons, grandsons, and a great-grandson also held the mayor's post. Of her descendants, it is Lola Dicang's son Simplicio who began Talisay's most enduring line of Lizares mayors. Don Simplicio's mansion overlooks the town square and the old municipal hall as if it is the mansion that  is the center of the town and its seat of power.

Don Simplicio Lizares' Mansion. With balconies overlooking the town square and the Municipio, it is no wonder that this grand old mansion produced three generations of Talisay mayors. (photo from Rogue Magazine)

Facing Don Simplicio's mansion on the other side of the town square is the San Nicolas de Tolentino Parish Church and beside it, the Talisay Campus of the University of Negros Occidental Recoletos High-School and Grade-school.UNO-R was founded before the war by Dr. Antonio A. Lizares(one of Enrica's sons) and Dr. Francisco Lizares Kilayko (a grandson of Enrica). The school was known as the Occidental Negros Institute and it did not begin offering college courses until after the war, when it re-opened but this time in the capital city of Bacolod. When ONI became the University of Negros Occidental in 1956, it was already established in its present site beside Dr. Antonio's Lizares Compound on Lizares Avenue, Bacolod City.

After World War II, My grandfather, Dr. Antonio A. Lizares and his wife, Carmen Rodriguez, established their Bacolod residence in a sprawling Spanish style mansion with a tower, balconies, sweeping staircases, a grand ballroom,and expansive terraces and courtyards that made the mansion something like a fairy tale castle. Antonio served as governor of the province and mayor of Talisay. He was known as a centralista (family owned 3 sugarcentrals) and because he was enterprising and generous to Church and community, he left many a landmark, including the Sacred Heart Seminary, the San Antonio Abad Parish Church, the Bacolod Police Headquarters,and St. Vincent's Home for the Aged. 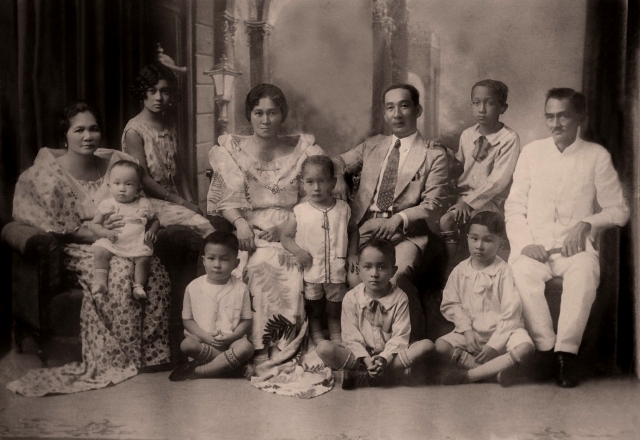 Antonio and Carmen Lizares with their 9 children and Carmen's parents, Jovita and Domingo Rodriguez

The families of Enrique Lizares, Asuncion Lizares Panlilio, and Nicolas Lizares tookover Lola Dicang's extensive landholding in Granada, in the northeastern part of Bacolod. There they left Lizares footprints in the formof public schools, the Bacolod Boys' Home,and the Salesian retreat house. Rodolfo, son of Simplicio, built a mansion to compare with his uncles.' He and his father Simplicio were also among the founders of the Cebu Institute of Technology, well known producer of Cebu's first engineers. Enrica's son Emiliano built himself an extravagant mansionin Jaro. My great aunt, Asuncion married a Panlilio, one of the governors of Pampanga while her youngest sister Remedios became the second wife of the statesman, Leon Guinto.Their sister Adela became the matriarch of a line that produced bankersand industry leaders like Placido Mapa Sr. and Placido Jr,. and Fr.Bernard Ybiernas, provincial of the Carmelite monks in the Philippines. Dolores, another daughter of Enrica, became the mother of Ramon Nolan, Philippine ambassador of the sugar industry for many many years.

Mansion of Emiliano Alunan Lizares in Jaro, Iloilo City. The Mansion is now an Exclusive School

As low-key a lifestyle as the Lizareses enjoy (at least when compared to the other big clans of Negros), the family does have several hectares set aside for a private family cemetery with lots assigned to each branch of Enrica's family and the families of Efigenio's siblings. During the feast of All Saints (November 1), Lizareses, Granadas, de Ocas, and Labayens wander from one mausoleum to the next in this exclusive little domain, visiting the living and paying their respects to the dead, remembering the exploits of General Simon Lizares who was one of the Cinco de Noviembre generals, wondering at how there could have been two Antonio A. Lizareses both married to Carmens, admiring the ornate chapel wherein lie the remains of Emiliano Lizares, owner of the mansion in Jaro. asking about relations, strengthening ties, and enjoying the different treats that families prepare for this not-to-be-missed annual family reunion. Perks of the rich of Negros.

A tenth of a ninth of a fourteenth (est. of my share of Lola Dicang's fortune) of even the greatest fortune does not really amount to much, so even as some members of the family remain planters and centralistas, others are developing and managing subdivisions, apartments, or commercial buildings. Many Lizareses have sought and made their fortunes abroad. Meanwhile, the new generation has discovered a fascination for culinary arts, hotel and restaurant management, fashion and design, and architecture and landscaping. Needless to say, there are also heirs who have made it their grand business to continue as caretakers of St.Vincent's Village and in otherways, to feed and clothe the poor, defend the oppressed, and serve the community of God. And because the Lizareses have remained true to thelegacy of Enrica (who ironically,was an Alunan and not a Lizares), thef amily line will continue because Lizareses are peaceful and fair in their dealings, modest in their ways, and God-fearing in their actions. So it was, so it shall be.

Oops, you forgot something.

The words you entered did not match the given text. Please try again.

Reply Granada property
1:20 AM on August 28, 2011
If you are seeking to find houses for rent, houses for sale, flats for rent and anything else property related in the Spain area. YespanYa Property is your number one online website if you are searching for houses for sale, you can search by an array of dimensions including bedrooms and property type, you can also narrow your search down to price or amenities. On the other hand if you are looking to sell your house or flat in Spain, then there is no better place to list it then YespanYa Property, put your ad in front of millions of local and national buyers.

Reply Val Caulin
10:09 AM on August 12, 2012
I love your blog. I will be coming to Bacolod this weekend and hopefully visit your ancestral house in Talisay. I have a degree in History so it goes how fascinated I am with your entries.

My father grew up in Toboso, also owned by the Lizares. My father also said about how they established CIT. Too bad the mansion was bulldozed. It was a nice sight, red bricks on top of a hill..

Reply Connie
1:12 PM on November 26, 2017
loans in san antonio
get cash fast
signature loans las vegas
how to get a loan with no credit
24 hour loans